Coverage of the Morton - Gould Controversy

I know that I have not had the chance to continue writing my comments on the controversy arising around the re-measurement of Samuel Morton's collection of crania.  I intend to finish that task up this summer.  Until then, here is a collection of citations from the web related to the criticism of Gould's interpretations.  I'll include a more scholarly version later, of course.  This is just to give a flavor of the range of opinion.

Morton skulls hold controversial history
The Daily Pennsylvanian
In his research, Morton found that European skulls were larger than African skulls and he took this information to assert that Europeans were more intelligent than Africans. Stephen Gould, an evolutionary biologist, rose to counter Morton's findings....
http://thedp.com/index.php/article/2011/11/morton_skulls_hold_controversial_history

Scientific error, scientific fraud: why did Gould claim Morton mismeasured skulls?
Posted on March 17, 2012 by Joan Strassmann
http://sociobiology.wordpress.com/2012/03/17/scientific-error-scientific-fraud-why-did-gould-claim-morton-mismeasured-skulls/
Anthropologists Hurl Skulls at Stephen Jay Gould
In the example in question, nineteenth century physician Samuel George Morton, who filled skulls from his grisly ...
deliriumliberty
http://deliriumliberty.wordpress.com/2012/03/27/601/
Skullduggery? Did Stephen Gould’s Bias against Samuel Morton Prove His Point?
September 19, 2011 by Kelly Grooms
"Ironically, it seems that it was Gould’s analysis that was flawed and influenced by his biases. Where the results reported in this study falsify Gould’s hypothesis that Morton manipulated his data, they also lend support his greater hypothesis that “Unconscious or dimly perceived finagling is probably endemic in science”, as his analysis of Morton is a strong example of bias influencing results."
http://promega.wordpress.com/2011/09/19/skullduggery-did-stephen-gould%E2%80%99s-bias-against-samuel-morton-prove-his-point/

Gould's skulls: Is bias inevitable in science?
New Scientist
http://www.newscientist.com/article/mg21128225.900-goulds-skulls-is-bias-inevitable-in-science.html
Some left response to latest Gould exposure
race/history/evolution notes
http://racehist.blogspot.com/2011/07/some-left-response-to-latest-gould.html
John Horgan equates incompatibilism with racism
Why Evolution is true
http://whyevolutionistrue.wordpress.com/2011/06/25/john-horgan-equates-incompatibilism-with-racism/
Mismeasure for mismeasure
Nature
474, 419 (23 June 2011) Published online 22 June 2011
A critique of the work of Stephen Jay Gould should serve as encouragement to scrutinize the celebrated while they are still alive.
http://www.nature.com/nature/journal/v474/n7352/full/474419a.html

The Mismeasure of Stephen Jay Gould: Dr. Burns' Commentary
http://theburnsarchive.blogspot.com/2011/06/mismeasure-of-stephen-jay-gould-dr.html
Image from the physical anthropology collection at The Burns Archive: 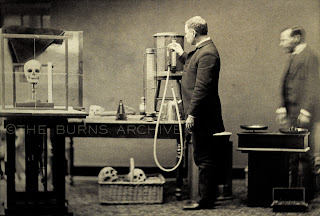 Graphic: John Shaw Billings, MD & Cranial Capacity Research, 1885.
“Ascertaining Capacity of Cranial Cavity by Means of Water”
Samuel Morton collection of skulls at center of controversy
June 16, 2011
(PhysOrg.com) -- The scientific integrity of one 19th century Philadelphia scientist has been reaffirmed—but at the decided expense of a prominent late 20th century scientist who had discredited him.
http://www.physorg.com/news/2011-06-samuel-morton-skulls-center-controversy.html

Related or mentioning Morton or Gould

"Peter Wanderfalke (1 April 1806 - ca. May 1849) was a German anthropologist and anatomist, closely associated with early race theory but also an early opponent of eugenics.
In it he reviews Blumenbach's race classifications, Samuel George Morton's.... In 1845 Wanderfalke received a copy of Samuel George Morton's new work...."
http://wikibin.org/articles/peter-wanderfalke.html

An example of how the Right has responded:

An interesting article in Science on migrations in Africa coinciding with the savannas replacing rainforest in central Africa, c.1000 BCE.

Intensifying Weathering and Land Use in Iron Age Central Africa

About 3000 years ago, a major vegetation change occurred in Central Africa, when rainforest trees were abruptly replaced by savannas. Up to this point, the consensus of the scientific community has been that the forest disturbance was caused by climate change. We show here that chemical weathering in Central Africa, reconstructed from geochemical analyses of a marine sediment core, intensified abruptly at the same period, departing substantially from the long-term weathering fluctuations related to the Late Quaternary climate. Evidence that this weathering event was also contemporaneous with the migration of Bantu-speaking farmers across Central Africa suggests that human land-use intensification at that time had already made a major impact on the rainforest.