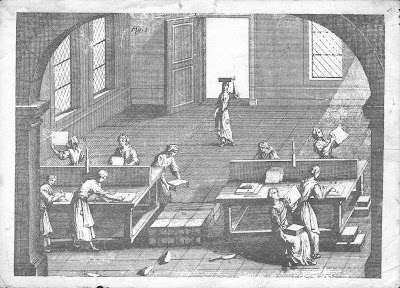 Welcome to CESQUE 96,  the July 2013 edition of Carnivalesque, the Pre-modern blog carnival.  It is a great pleasure to host the carnival this month, and an equally great pleasure to get the chance to read so many interesting and notable writings. Of course, I hope you enjoy these selections and look for the next edition of the Carnival to be hosted by The Sloane Letters Blog, September 2013.

On Digital Archives and Manuscripts

Jacqueline Wernimont is prompted to consider, from her position as a historian, "the history of Early English Books Online and I have been struck by the centrality of remediation to the history of the resource and the long lines of corporate control" - Alternate EEBOs?
https://jwernimont.wordpress.com/2013/07/11/alternate-eebos/

In this vein, Sarah Werner's keynote address at the Digital Preservation 2013 conference, “Disembodying the past to preserve it” raises a number of important questions regarding our experience of digitized archival materials. The text and some slides are posted at Wynken de Worde. There is also a video of the talk and a pdf of the slides.
http://sarahwerner.net/blog/index.php/2013/07/disembodying-the-past-to-preserve-it/

And Jenneka Janzen considers what in another context Otto Neugebauer referred to as the bias against the study of "wretched knowledges" and the people who produced them: The Boring, Ugly, and Unimportant –Biases in Manuscript Research.


....I’ve spent some time thinking about the role aesthetics play in which manuscripts are studied, and which ones are deemed too boring, unimportant, or ugly to attract interest. Certainly, it depends on your field of study. But where do some of these research biases come from?" - Jenneka Janzen

Taking off from E.P. Thompson's work but looking forward in contemplating its implications for the next decades, The Many-headed Monster hosted The future of ‘history from below’: an online symposium
http://manyheadedmonster.wordpress.com/2013/07/03/the-future-of-history-from-below-an-online-symposium/

The Renaissance Mathematicus brings our attention and reminds us to consider what does not get preserved:

....Mathematician, cartographer, navigator, anthropologist, linguist, astronomer, optical physicist, natural philosopher Thomas Harriot was a polymath of astounding breadth and in almost all that he attempted of significant depth. However, for reasons that are still not clear today he chose to publish next to nothing of a life’s work devoted to science.

Thomas Harriot a Giant of Early Modern Science? "He didn’t publish and so he perished (historically)". http://thonyc.wordpress.com/2013/07/05/he-didnt-published-and-so-he-perished-historically/


....In the 18th Century sugar meant one thing: slavery, or at least it did until 1791 when a campaign was launched to boycott sugar from the West Indies. Parliament was dragging its feet over abolition, having failed to pass a Bill in that year outlawing the slave trade. The response: hundreds and thousands of households up and down the country ‘did their bit’ by giving up sugar altogether, or opting for more expensive sugar from the East Indies, produced by free labour.

Did women produce seed? Were men necessary for reproduction? A fascinating post at Early Modern Medicine: Baby in the Bathwater

....The suggestion that women could conceive without engaging in sexual activity may seem bizarre to a modern audience, but it came out of the medical uncertainty about whether or not sex was necessary for conception. One treatise on chemical medicine for example noted that ‘we see many Plants grow without precedent seeds, and many Animals produced without copulation of Male with Female’.3 In particular it was noted that fish could generate without recourse to copulation, which suggested that sex was not always necessary.

The English Legal History blog features a post by Riona Doolan on the arson as a crime in medieval Ireland and mentions having produced translations of the oldest commentaries on arson, which date to the 14th Century: Arson in Medieval Ireland

....Arson was treated as a serious crime in the medieval period. Buildings were mostly made of wood, and fires could spread easily. It was a crime that had the potential to impact not just the victim but also the entire community, with disastrous consequences if the fire got out of control. I have recently completed a translation of the oldest of the five commentaries on arson dating to the fourteenth century


The Recipes Project gives us a good starting point for a reading through a number of posts this month that intersect quite nicely.  In Dipping Your Toes in the Water: Reconsidering Renaissance England’s Attitudes Toward Bathing, Colleen Kennedy reflects on modern prejudices about bathing, cleaning and hygiene in the history.
http://recipes.hypotheses.org/1759

Tara Hamling at Material Histories provides a second update to her on decoration in Early Modern Britain: Decorating the Godly Household:Postscript (2) - Another David and Goliath

....This post concerns another lost depiction of David and Goliath, which once formed part of a painted scheme in a house on the High Street of Chalfont St Peter in Buckinghamshire. The building was demolished in 1938 and it appears that no official attempt was made to record or salvage its remarkable scheme of early seventeenth-century domestic decoration.

Another post from The Recipes Project that falls nicely with their first:  Learning to cook in Early Modern England  http://recipes.hypotheses.org/1546

Depending on the writer though, some sickness narratives take an almost humorous view of their symptoms, treating the reader to a light-hearted walk through what were almost certainly unpleasant episodes. To me these are the most engaging. One set of letters I came across in my research for my PhD fits into this category. They are letters from a Breconshire attorney, Roger Jones of Talgarth. I haven’t researched much about the man himself (maybe I will one day) but he was clearly a ‘man about town’ – in eighteenth-century parlance, a Beau Monde. One particular run of letters were fired off in rapid succession following an abortive trip to Hay on Wye. In February 1769 he wrote to his brother, clearly in some distress.

Katy Meyers at the blog Bones Don't Lie gives us the rather chilling account of "Coffin Birth" in both the present day and the 1600s in New Morbid Terminology: Coffin Birth

...coffin birth is what it sounds like- the occurrence of a fetus being birthed by the mother after her death.When I started researching the term more closely I discovered that this wasn’t actually that uncommon in the past, and its only recently that this doesn’t occur.

Heresy, Eroticism, Dreams, and the Demonic


Jennifer Evans, of the always engaging and interesting Early Modern Medicine blog provides us with Crime, Sex and the Spanish Fly

....Spanish Fly, or Cantharides, are, as the name suggests, small emerald-green flies (above is a 13th century illustration of one). Crushed or powdered these flies were used throughout the early modern period as a medicinal substance.... - Jennifer Evans

....These days, those suspected of planning hate crimes are likely to lose their USB memory sticks or their laptops; in 1593, the authorities went straight for Kyd's looseleaf papers, the material witnesses of his ideas, his prejudices, his intentions. These were quickly shown to contain heretical writings apparently questioning Christ's godhead, and Kyd was immediately arrested and probably tortured.

Mike Rendell, @GeorgianGent, on how an 18th century exorcism in Bristol spurred the debate on truth of demoniacal possession: 13th June 1778: the exorcism of George Lukins, “the Yatton demoniac”

....a George Lukins from the nearby village of Yatton..... claimed to be possessed by the Devil (well, not just one devil but seven devils, and he insisted that it would therefore take seven clergymen to exorcise him).

And it is always good to end on a note of Satanic Seduction.  Sort of brings the section full circle and connects it to the earlier one on gender, science, and Pre-modern medicine.  Again from the Early Modern blog's Jennifer Evans comes this tale of fertility and domination:


....the idea of witches copulating with the devil, or demons, was widely discussed in early modern Europe, and caused consternation and anxiety for writers at the time. This blog post will consider this phenomenon and show that medical understanding of sex and reproduction were central to these discussions. In particular demonology writers were concerned about whether sex with the devil could ever result in pregnancy and progeny.

For Recent Carnivals:
Visit the Carnivalesque Archives
http://carnivalesque.org/archive.php
Next Carnival to be hosted by The Sloane Letters Blog, September 2013.