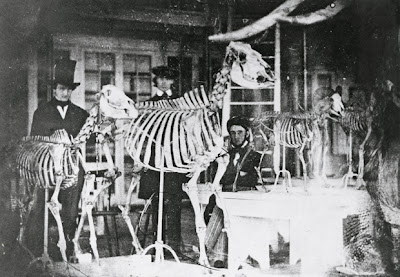 This 1842-43 daguerreotype is the oldest known view of the interior of an American Museum, in this case, the The Academy of Natural Sciences of Philadelphia.  More remarkable, the photo shows Samuel G. Morton, Joseph Leidy, and Edgar Allan Poe, who studied mollusks at the academy.
The photo appears in A Glorious Enterprise: The Making of an American Science. (See works by Joseph Leidy at Internet Archive.)

Poe also penned the story "Some words with a Mummy", which featured George Gliddon, Morton's protege and co-author of Types of Mankind with Josiah Nott, as one of the characters.  Here is a passage as they awaken Allamistakeo using electric shocks:

It was by his [Dr. Ponnonner] advice, accordingly, that we made, upon the spot, a profound incision into the tip of the subject's nose, while the Doctor himself, laying violent hands upon it, pulled it into vehement contact with the wire.
Morally and physically–figuratively and literally–was the effect electric. In the first place, the corpse opened its eyes and winked very rapidly for several minutes, as does Mr. Barnes in the pantomime, in the second place, it sneezed; in the third, it sat upon end; in the fourth, it shook its fist in Doctor Ponnonner's face; in the fifth, turning to Messieurs Gliddon and Buckingham, it addressed them, in very capital Egyptian, thus:
"I must say, gentlemen, that I am as much surprised as I am mortified at your behaviour. Of Doctor Ponnonner nothing better was to be expected. He is a poor little fat fool who knows no better. I pity and forgive him. But you, Mr. Gliddon–and you, Silk–who have travelled and resided in Egypt until one might imagine you to the manner born–you, I say who have been so much among us that you speak Egyptian fully as well, I think, as you write your mother tongue–you, whom I have always been led to regard as the firm friend of the mummies–I really did anticipate more gentlemanly conduct from you. What am I to think of your standing quietly by and seeing me thus unhandsomely used? What am I to suppose by your permitting Tom, Dick, and Harry to strip me of my coffins, and my clothes, in this wretchedly cold climate? In what light (to come to the point) am I to regard your aiding and abetting that miserable little villain, Doctor Ponnonner, in pulling me by the nose?.....

....I may as well take this occasion to remark, that all the subsequent conversation in which the Mummy took a part, was carried on in primitive Egyptian, through the medium (so far as concerned myself and other untravelled members of the company)–through the medium, I say, of Messieurs Gliddon and Buckingham, as interpreters. These gentlemen spoke the mother tongue of the Mummy with inimitable fluency and grace; but I could not help observing that (owing, no doubt, to the introduction of images entirely modern, and, of course, entirely novel to the stranger) the two travellers were reduced, occasionally, to the employment of sensible forms for the purpose of conveying a particular meaning. Mr. Gliddon, at one period, for example, could not make the Egyptian comprehend the term "politics," until he sketched upon the wall, with a bit of charcoal a little carbuncle-nosed gentleman, out at elbows, standing upon a stump, with his left leg drawn back, right arm thrown forward, with his fist shut, the eyes rolled up toward Heaven, and the mouth open at an angle of ninety degrees. Just in the same way Mr. Buckingham failed to convey the absolutely modern idea "wig," until (at Doctor Ponnonner's suggestion) he grew very pale in the face, and consented to take off his own.
It will be readily understood that Mr. Gliddon's discourse turned chiefly upon the vast benefits accruing to science from the unrolling and disembowelling of mummies; apologizing, upon this score, for any disturbance that might have been occasioned him, in particular, the individual Mummy called Allamistakeo; and concluding with a mere hint (for it could scarcely be considered more) that, as these little matters were now explained, it might be as well to proceed with the investigation intended. Here Doctor Ponnonner made ready his instruments.
In regard to the latter suggestions of the orator, it appears that Allamistakeo had certain scruples of conscience, the nature of which I did not distinctly learn; but he expressed himself satisfied with the apologies tendered, and, getting down from the table, shook hands with the company all round."

Related posts from this blog:

Audubon's Birds and some often Overlooked Contributions of Women to Natural History
http://until-darwin.blogspot.com/2010/12/audubons-birds-and-some-often.html

Comment II on “Gould versus Morton”: Morton’s Crania Collection in the Context of the Final Decades of Natural History, Part One.
http://until-darwin.blogspot.com/2011/07/comment-ii-on-gould-versus-morton.html